‘Red Dragon’ Has Bittersweet Return To The Rolex

‘Red Dragon’ Has Bittersweet Return To The Rolex 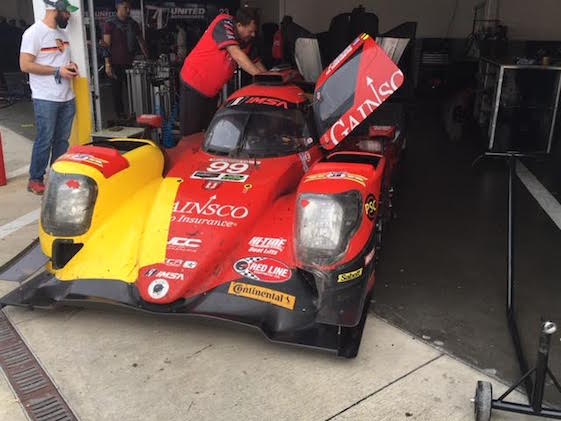 The No. 99 ‘Red Dragon’ bears a bodywork repair with a section of
nose borrowed from its sister JDC-Miller MotorSports No. 85
ORECA/Gibson Prototype. (RacinToday.com photo by Martha Fairris)

DAYTONA BEACH, Fla. – Returning to the Rolex 24 At Daytona in his new role as sponsor with JDC-Miller MotorSports allowed GAINSCO executive Bob Stallings to experience something completely different during the twice-around-the-clock sports car classic. 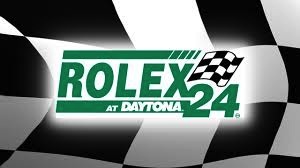 “I left the track between midnight and 12:30 (a.m.) and came back at around 6 o’clock on Sunday morning,” said Stallings, a veteran of nine Rolex marathons from 2006-2014 as owner of GAINSCO/Bob Stallings Racing. “It was the first time I’ve not stayed all night. But they were in total control and did not need any assistance from me.”

With JDC-Miller Team Principal John Church calling the shots  from his pit box seat, the No. 99 ORECA/Gibson “Red Dragon” sponsored by GAINSCO Auto Insurance had overcome a number of issues _ including contact with another Prototype _ by time Stallings exited Daytona International Speedway for the night. When he returned, the No. 99 and JDC-Miller’s yellow No. 85 PSC Security “Banana Boat” ORECA/Gibson were locked in an intramural squabble that produced top-10 finishes for both.

Previous Rolex 24 winners Stephen Simpson, Misha Goikhberg and Chris Miller teamed with 2016 Le Mans winner Gustavo Menezes to score a seventh-place finish in the No. 99 after starting 14th in the 20-car Prototype field.

A delay with a rear tire change during the No. 85’s final pit stop allowed Menezes and the No. 99 to take over sixth position in the closing stages. The “Red Dragon” made its final 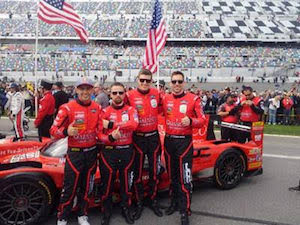 The pilots of the No. 99 prototype car at Daytona. (Photo courtesy of JDC-Miller MotorSports)

stop for fuel shortly thereafter but the stop went awry when the starter jammed, forcing the crew to bump-start the car a few times to dislodge it. The No. 99 re-fired and returned to the chase en route to a seventh-place finish, one spot behind the No. 85.

Both JDC-Miller entries completed 798 laps around DIS’ 3.56-mile/12-turn “roval” layout that includes portions of the high-banked speedway. “Finishing that race is almost a lifetime achievement award and finishing in the top-10 is an excellent result,” Stallings said.

“Oh, I’m happy (with the two top-10 results) but I don’t like when we make mistakes,” said Church, who unlike Stallings spent the entire 24-hours along pit road. “When you make mistakes you’re beating yourself. You start the race with a car that can win and when you start taking away from that, you get a poor result.”

Cases in point _ a slow early pit stop during which Goikhberg turned the No. 99 over to Miller _ and the latter’s stop-and-go penalty for speeding on pit lane during a subsequent stop.

“Chris knows better,” Church said. “He either missed the (speed) limiter or didn’t get slowed down enough. And it was egregious enough that we didn’t just get a drive-through, we got a stop-and-go. That just costs you. It’s all seconds…pit stops we just didn’t do a great job on. There weren’t a lot of yellows and if you screw up a pit stop it’s another five or six seconds, which is really hard to make up when the field is this tight.

“Four hours into the race we’re already out of it. And you could tell at that point they (IMSA officials) had already set the tone for how many yellows they were going to throw _ 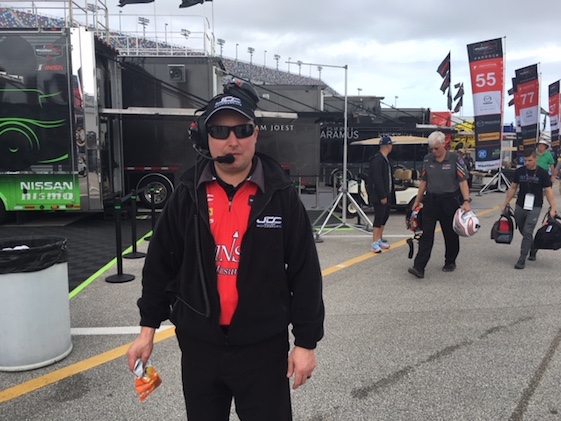 which was zero. Somebody would have to be like on fire and dying before they’d throw a yellow. We were going to have to do it on pace and there was no way we could drive around the Cadillacs. Even the Penske (Acura Prototype) guys tried everything to do that.”

Additionally, Miller (Saturday night) and Menezes (Sunday morning) dealt with separate rear tire failures, with each carefully nursing the car back to the pits with very little damage but with time lost.

The No. 99 also produced Stallings’ so-called unexpected “remarkable moment.” Simpson was at the wheel just before 10 p.m. Saturday, a little over seven hours into the race, when he made contact with another Prototype in the famed curved “International Horseshoe” section.

“It was Turn 5 and the Prototype in front of me was rapidly approaching a GTD car and the turn,” Simpson said. “He was trying to decide whether he wanted to go on the inside or the outside and I went on the inside and he got back to the inside, or maybe he wanted to make it more difficult for me to overtake and he came down on my front wheel and corner. The angle of the impact broke the left steering arm and we went back to the garage.”

The team lost eight laps during the repair. “I’m disappointed because while it wasn’t my fault, ultimately I’m in the car and maybe there was something I could have done differently,” Simpson said.”I put it down to hard racing.”

That mindset was fine with Church. “It was at a point in the race where we really needed to assert ourselves,” Church said. “He went after it and there’s always a shared responsibility (in a crash)…like in insurance. There was a lot of aggressive driving out there and that’s what you’ve got to do. At this level you can’t just sit back and say, ‘Oh well, we’ll get it next lap.’

“But at 10 o’clock last night I’m watching the computer and I said, ‘Man, I know we belong up here (in the standings); we’ve done it in the past and deserve to be here.’ You look back and you say, ‘Well, if we had that chunk (of time) back and that chunk back and that chunk back, we’d have won by three laps.’ We’ll go back and sit down and have a little pow-wow on why did it happen? It’s not like we’re making the same mistakes over and over again.”

Stallings said the incidents allowed him to learn several things about Church and his Minnesota-based partner, John Miller. “One thing that appealed to us was the personalities of the people and the respect they have and show for each other and the closeness of the team, very much like the personality of our team,” Stallings said. “They confirmed all of that. I saw them overcome unplanned events, and they held together and counted on each other, trusted each other to fix things and keep the car on the track. 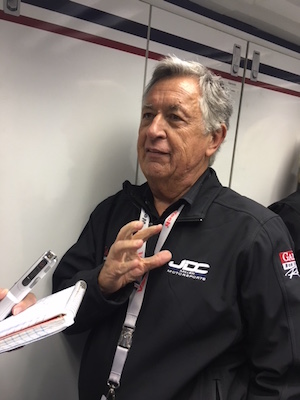 Bob Stallings returned to the 24 in a different role this year.

communicator with the drivers on-track, with the engineers and the electronics people and the team that went over the wall. A very steady hand. He has respect for his people and their ability, and the best sign of respect for an individual is to have very high expectations. The way you get things done is by not focusing on all the things you do well but looking at the things you can do better. That’s the sign of a good leader.”

Stallings equally was impressed with the driver lineup in and out of the car. “They were very heady and calm in the car when things weren’t going as expected,” said Stallings, who introduced a group of Dallas-based GAINSCO executives and agents to the drivers during a social get-together Friday night. “They’re very, very glib and use humor and try to simplify things and not sound too technical. They really demonstrated respect for our brand and focused on our agent base. All our agents loved ‘em.

“And when you can finish a race ahead of Roger Penske and Wayne Taylor in points going into the season, that’s always a good start. Both organizations are formidable and sometimes it’s the luck of the draw. But in most cases it’s the ability of one team to capitalize on the misfortunes of others, and John really showed that ability.”

For their parts, Church and Simpson recognized that in addition to on-track results, Stallings and his entourage were there to be entertained.

“All in all, a seventh-place finish for the Red Dragon is respectable,” Simpson said.”Certainly as racers we always want more, but in this competitive field with 20 Prototypes, to finish seventh and another 24 Hours, it’s an accomplishment and something to build on. And I have to say this weekend was the first time I met Bob. I think so highly of him and his wife (Linda). Again, they fit so well into what we’ve got going here. It’s a great relationship.”

The Stallings already were heading back to Texas via private jet Sunday when Church noted, “Bob is happy. He had fun. I mean, I think he left the track Saturday night thinking, ‘Oh, boy.’ He came back in the morning and said, ‘You made some progress.’ You got to keep grinding it out. We never give up.”

Stallings classified his new role as sponsor as “a blast,” complete with four-five hours of sleep. “As an owner you’re right in the middle of everything and your heart is moving up and down,” Stallings said. “Although I had the same sense of urgency and expectation, it’s not as debilitating to be in the role I’m in. I’m not there to direct or control or give advice. I’m here as a helper and someone who wants the team to win. It’s up to them to figure how to make that happen.”